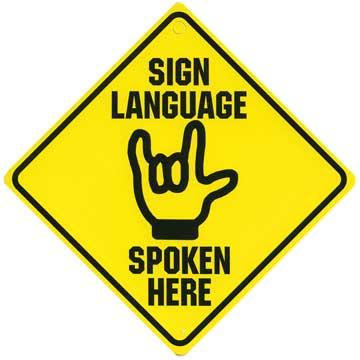 Knowing sign language has many benefits for adults as well as children. We had the pleasure of learning sign language from a deaf man who was the instructor for one of the youth in our support group. Our instructor was a lot of fun to be around and interacted with the children marvelously.

He also told us that just like people speak with a different dialect the same is true with sign language. Depending on where you go some signs maybe different, he said that there has been times he has run into this problem. I guess you could always finger spell, I'm not sure if that varies also would be interesting to find out.

Knowing sign language has given my children and I the opportunity to speak to each other during church and at other times when we could not be verbal. It has also helped when we would meet someone who was deaf, they really appreciate it when someone can talk their language.

During church I have used it to scold the boys when they would act up. While they are older now the sign for stop is still used during church time. When they were younger I would also use it to tell them they were doing good. We do not use it that much anymore, but every now and then we will just so we don't forget.

My husband works with a deaf woman, he drives a truck and goes in to conduct business with her. However, the only business really taking place is the paper work he needs so there is little need for verbal communication. One day he needed to use the bathroom and had a hard time communicating what he needed. I gladly showed him the sign for bathroom, well toilet so next time he will be able to communicate with her.

The other night I was watching 19 Kids and Counting and Michelle was saying how they taught Josie some simple sign language. She commented that Josie's ability to sign what she wanted caused her not to cry out like most children who are not yet talking do. While it was her bottle that she wanted Josie has been taught the sign for more and uses it to let them know she wanted her bottle. It may be used for other items as well, but no matter she can communicate with her hands rather than causing a commotion by crying and carrying on.
There are many free resources for learning sign language on the internet.

ASL Pro has free signing resources along with
products.

Your Dictionary has resources for free worksheets.

Posted by Heavenly Bodies at 1:31 PM

We taught my son a few signs when he was really little. It was fun to watch his little fingers forming words.