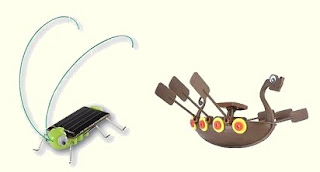 My boys’ ages ten and twelve were allowed to pick out some things they wanted to do during this school year. Both of them wanted some robots to build and pick out some pricy ones from Home Science Tools. After some careful thought and the fact that this is something neither of them had done before I decided to purchase something cheaper and easier first. I found a product called RobotiKits through Rainbow Resource which were solar powered and cost under $20.00. The twelve year old chose a frog, but mom screwed up and ordered the grasshopper which was able to be assembled in approximately ten minutes. My ten year old chose the valiant Viking ship which took him approximately two and half days to complete, this included the removing of the plastic parts. The grasshopper was a great success and the cats enjoy it as well. Unfortunately while the ship looks wonderful we have yet to see it work, this could be due to not enough sun however since it has been somewhat cloudy here lately. The motor was tested before the assembly was completed so we know that is not the problem. We will wait for a bright sunny day and see what happens, if it still does not function we will disassemble to check for problems.

If you have a young one interested in robots with no experience in this area I highly recommend Robotikits. We will be purchasing others and after seeing her brothers their eight-teen year old sister decided she wants the crab. 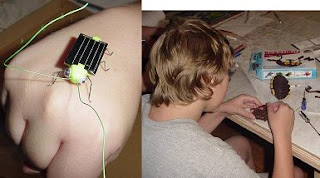 Posted by Heavenly Bodies at 5:55 PM