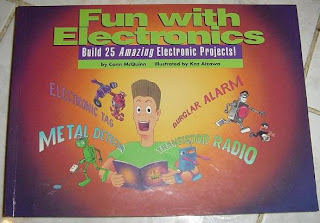 Before school starts I have the boys make a list of what they would like to learn about. My oldest not only wanted to build a robot he also was interested in learning more about electronics. I was a little leery of this due to his ability to become frustrated when he is unable to achieve his goal. We started with easier robots because of this and I searched the Rainbow Resource catalog for anything pertaining to electronics. If you have ever seen their catalog it is huge, not so much because they carry a large amount of product, but reviews are included on every thing they sell. This was helpful to me as I searched and decided on “Fun with Electronics.” I again became leery when I read that there was a work bench that required assembly before any of the projects could be completed. However this boy who would become easily frustrated sat silently and worked intently to assembly the work bench. 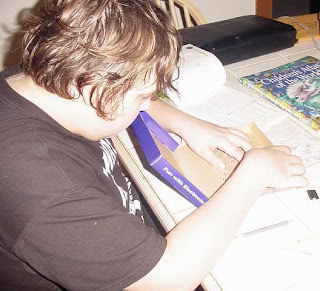 I was impressed that while it was time consuming and required approximately four hours to assembly he did it (not all in one day.) Projects included are fading light, ambulance siren, burglar alarm just to name a few, altogether there are twenty five different projects to conduct. Everything needed to complete the projects is included except for the nine volt battery which is required. The book which is included gives information on the different electronic items utilized in the work bench, which is made out of card board. Rainbow Resource states in their catalog that children ages 5 and up can utilize this product and costs $15.00. My son who is utilizing this is twelve, he says it is fun and very exciting to conduct the first project. 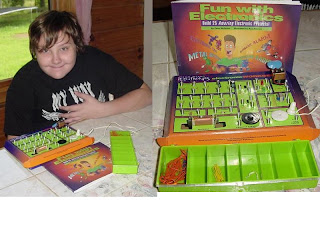 Posted by Heavenly Bodies at 12:49 PM