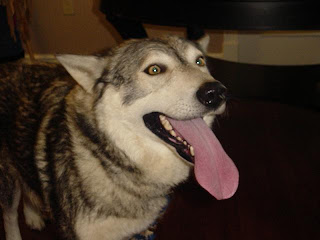 Last Thursday the boys and I had a wonderful opportunity along with some other homeschoolers to meet a Native American and his wolf, Waya. He was owned by an unknown individual and found by the Humane Society. Waya’s current owner Coyote Brother or Lane knew individuals working at the Society who called him to inform him they had a wolf and thought he would be interested in adopting it. At first Lane was skeptical because he already had two dogs, some cats, goats and chickens. However, when he found out that Waya was a full blooded wolf he eagerly accepted responsibility for him. It turns out that when light reflects off the eyes of a wolf the pupil turns green unlike dogs whose turn red. Waya was found when he was two years old and is now six.Waya’s two very front teeth have been filed done to almost nothing by his previous owner, but it did not break the gentle loving spirit of this wolf. 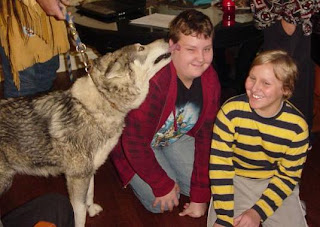 Lane and his wife Karen (Free Spirit) and their son William (Talking Crow) belong to the Cherokee Wolfe Clan here in West Tennessee, where Lane is the Vice Chief. Both Lane and his wife speak their native language to both their six month old son and to Waya. They shared some spiritual songs with us in their native tongue along with words geared towards Thanksgiving. Three other members of the clan were present also, Dancing Crow, Crying Wolf and his mother. 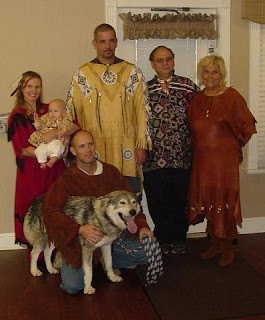 I found Dancing Crow’s shirt interesting and talked to him about the material, which is deer skin. He shared with me that he is the third generation to adorn this shirt which is of the Algonquin tribe. I asked him what the shirt was held together with and at first his response was “You don’t want to know.” I did want to know and was not surprised when he said it was deer intestines. The black strands which decorate this shirt are made from the hair of a horses tail. Native Americans utilized as much of the natural materials found around them to survive. It is wonderful that Dancing Crow has such a treasure to hold onto and pass down to his children. 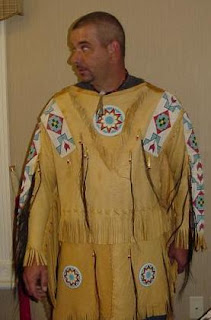 Crying Wolf was born deaf, but is capable of speech. While Dancing Crow said many don’t understand him, there was little of what he said that I did not understand. 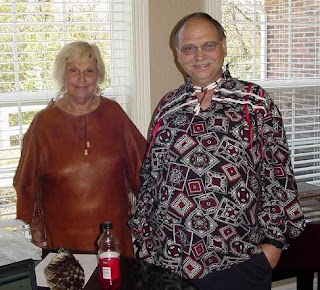 Posted by Heavenly Bodies at 5:23 PM